here we have expertly-crafted pop, created by dedicated artists on a mission to make music for people to really enjoy.

It was Ariana Grande’s explosion into pop culture that kickstarted a new era for Girl Ray, as well as the realisation that their most-listened-to Spotify playlists contained pure pop music. When Poppy began experimenting with writing songs on a computer using keyboards, a collection of shimmering, foot-tapping, sparkling pop bangers poured out. With this new set of songs, Girl Ray have been brave enough to completely change their sound rather than play it safe, yet still remain unmistakably themselves - it’s Girl Ray, but with added synths. If their debut, ‘Earl Grey’, was a hot cup of tea and a cuddle on the sofa, ‘Girl’ is being in a cab with the windows down on the way to a beach bar for sundowners. 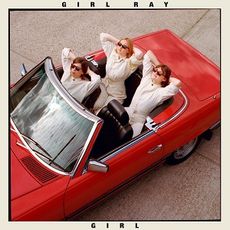