ALL IS DREAM DELUXE EDITION


compiling a wealth of studio rarities and a selection of dynamite live songs, this is an excellent insight into an exceptionally creative period for the band.

Formed in Buffalo, New York, in 1989, Mercury Rev quickly grew to become leading figures in left-field alternative rock. Earlier albums veered towards experimental, off-kilter psychedelia but, by the end of the decade, the band had developed their own brand of serene, piano-based Americana with the acclaimed, best-selling ‘Deserter’s Songs’ (1998). ‘ALL IS DREAM’, the sequel to ‘Deserter’s Songs’, was originally released on V2 in 2001 and boasted a more expansive, cinematic production than its predecessor (again courtesy of ex-member Dave Fridmann, by this time arguably the most in-demand producer in alternative US rock). UK, No. 17 US, Top 40 in Australia and in various European countries, etc.). 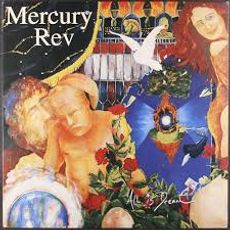