Aside from a brief contribution to the soundtrack of Shinji Aramaki's 'Appleseed', The Wings of Honneamise is the only anime film Sakamoto has scored to date.

Royal Space Force: The Wings of Honneamise is the first feature-length movie produced by japan studio Gainax in 1987. Ryuichi Sakamoto scored the film in the same year that he contributed to the famous Oscar-winning score of Bernardo Bertolucci's 'The Last Emperor'. The film's story takes place on an alternate world where a disengaged young man, Shirotsugh, inspired by an idealistic woman named Riquinni, volunteers to become the first astronaut, a decision that draws them into both public and personal conflict. The film was the debut work of the studio, whose later television and movie series 'Neon Genesis Evangelion' would achieve international recognition. 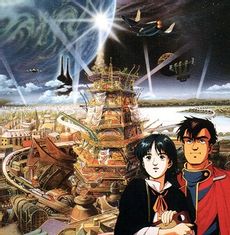