After a stint in London, the band broke up soon after moving to Berlin in 1982, and Cave formed Nick Cave and the Bad Seeds the year after, later described as one of rock's "most redoubtable, enduring" bands. The Bad Seeds, of course, continue to this day as Cave’s regular band on many of his albums and in concert. • This 3CD Set celebrates the longevity, musicianship, song-writing and pure, unadulterated talent of Nick Cave’s music, and contains three live concerts by Nick and his Bad Seeds, all recorded for live radio broadcast across the extent of their career. • DISC ONE features Nick and the Seeds complete show at Amsterdam’s Paradiso club in 1992, while DISC TWO has his extraordinary appearance at Germany’s Bizarre Festival in Cologne in ’96. • The set concludes on DISC THREE with the great man’s performance at Tokyo’s Fuji Rock Festival in 1998. 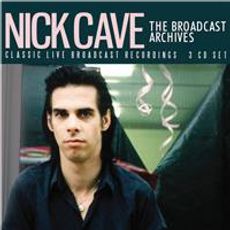