Yorkston and his thriftily sourced gang of players have pulled together a sumptuous set of serene indie folk.

Recorded and mixed in Sweden over the course of three days with a selection of musicians Winqvist had brought together, including Peter Morén (Peter, Bjorn & John), Cecilia Österholm (one of Sweden’s best-known nyckelharpa players), Emma Nordenstam (piano & cello) and Ulrika Gyllenberg (violin). The studio approach with The Second Hand Orchestra was entirely improvised around Yorkston’s songs, and the only song they heard in advance was “Ella Mary Leather”; Yorkston didn’t want to direct anyone too much but instead, allowed for a welcoming, instinctive, free-spirited and joyful atmosphere. The Wide, Wide River is a soothing, warm and sublime listen, whilst also highlighting Yorkston’s skills for songwriting, collaboration and as a musical conductor. The record takes in past loves, advancing age and friends, now gone, whilst also containing some of the most sanguine songs Yorkston has ever made. 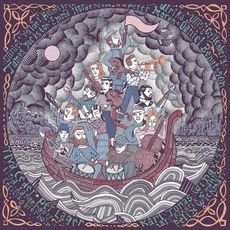