It is the first recording of Davis in Japan and the only album to showcase an early incarnation of his Second Great Quintet featuring Sam Rivers on tenor saxophone, following George Coleman’s departure. After this, Wayne Shorter’s appointment completed the classic line-up which recorded such albums as ESP and Miles Smiles, through to Miles in the Sky. The legendary Miles in Tokyo album is now available on vinyl in Europe for the first time. 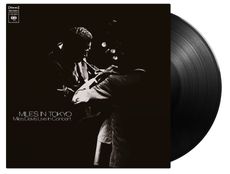