The name of her solo musical project Waxahatchee comes from a creek not far from her childhood home in Alabama and seems to represent both where she came from and where she’s going. Waxahatchee’s latest record, Ivy Tripp, drifts confidently from its predecessors and brings forth a more informed and powerful recognition of where Crutchfield has currently found herself. The lament and grieving for her youth seem to have been replaced with control and sheer self-honesty. “My life has changed a lot in the last two years, and it’s been hard for me to process my feelings other than by writing songs,” says Crutchfield. “I think a running theme [of Ivy Tripp] is steadying yourself on shaky ground and reminding yourself that you have control in situations that seem overwhelming, or just being cognizant in moments of deep confusion or sadness, and learning to really feel emotions and to grow from that.” Recorded and engineered by Kyle Gilbride of Wherever Audio at Crutchfield’s home on New York’s Long Island—with drums recorded in the gym of a local elementary school—Ivy Tripp presents a more developed and aged version of Waxahatchee. “The title Ivy Tripp is really just a term I made up for directionless-ness, specifically of the 20-something, 30-something, 40-something of today, lacking regard for the complaisant life path of our parents and grandparents. I have thought of it like this: [Waxahatchee’s last album] Cerulean Salt is a solid and Ivy Tripp is a gas.” As far as her goals with Ivy Tripp, Crutchfield says, “I heard someone say that you have to be the change you want to see. I just want to be the kind of musician I want to see in the world. I want to present myself in a way that reflects that.” January 2014 Pitchfork Best New Track, “Air”. 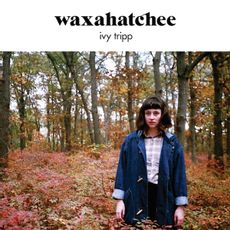