The second of January’s brace of new Polytechnic Youth releases sees the return to the label for Morgane Lhote, with her post Stereolab project HOLOGRAM TEEN.

A fabulous new 4 trk 7” EP entitled “Géométries insensibles” and released on pink wax in ace new Nick Taylor artwork. Morgane herself says of the project “the EP is the soundtrack to an imaginary 1980s dystopian sci-fi French movie in the vein of "Le Prix du Danger”, "Les Maîtres du Temps" and "Le Dernier Combat". The tracks follow the linear film narrative (at least my version of it!) of set up/conflict, "the chase scene", hope, and finding love. I kept the instrumentation simple and the songs short, with a handful of tracks and synths settings across the tunes, to keep a cohesive sound and narrative. it was really freeing to go for the "less is more" approach for once. That is until the last track which goes a bit "Xanadu" on you, but trust me, that's a good thing!" The EP, to these ears, recalls a passing nod to those early to mid ‘70s French cosmo-disco LPs, which at one point you’d struggle to give away, yet now fetch £50+ at Utrecht fairs- once thought as cheesy now highly sought after and in their own way, quite pioneering and often in whacked out, cosmic sleeve art. Regular PY (amongst others) art genius Nick Taylor reproduces this look perfectly for it’s sleeve, cemented further with the pink vinyl pressing…. Expected to sell out super quick…. 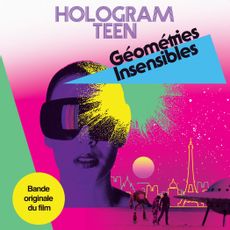