The “Temp Music” EP collects 6 tracks of ideas / works in progress / basics for pieces that in the most part would go on to feature in various forms as part of Peter Strickland’s “In Fabric” film soundtrack.

Recorded in 2015, the insert to this disk features extensive sleevenotes by Tim Gane, explaining how ideas and loose ‘instructions’ from Peter developed into suitable pieces from random, exploratory origins. Tim puts it best: “the idea was that Peter would be allowed to work on the script while listening to sounds possibly conducive to the desired atmosphere”. Giving the band some set categories, the EP features examples from them all, including (within the “drum machine recreations and sound-alikes” tab) tips of the hat to Cabaret Voltaire, John Carpenter, The Future / Human League. The Cabs drum machine piece evolved into a “made-up-on-the-spot” sound-alike called “Nagraphobia” which Tim describes as “probably a bit embarrassing but certainly fun to do”. It’s a beauty and a cornerstone to the EP here! 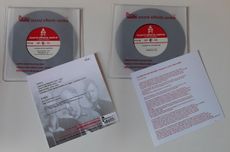