The first album Mica has released under their own name.

Vinyl edition released concurrently alongside second album Blue Alibi (xris02lp). Mica Levi is a musician and composer living in South East London who uses programming software, written notation and improvisation to produce music. They are currently a member of the groups CURL, Good Sad Happy Bad and Tirzah, and have composed scores for a number of films including Under The Skin, Jackie, Monos, Zola and Mangrove (part of the Small Axe series). 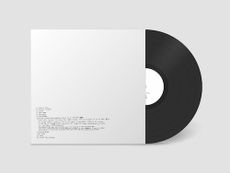