Produced by Nick Tauber and introducing a new band line-up the EP was led by the song ‘It’s A Mystery’ which became a hit and entered the top 40 UK singles chart, rising to no.4 in February 1981 and earning a silver certification from the BPI in March 1981. ‘It’s A Mystery’ became one of Toyah’s signature songs and is still performed to this day. This expanded release presents all four tracks from the original 7” EP on side one of the vinyl - remastered from the original master-tapes for the first time ever. Side Two includes the four original demo/incarnations of the songs which all started life in previous recording sessions, and again are remastered from the original mastertapes for the first time ever. It’s A Mystery began life as a song by the late 70s experimental synthesiser group Blood Donor with guest vocals by Toyah Willcox. The demos of Revelations (titled Jack & Jill) and War Boys (titled The Merchant & The Nubile) were recorded at Park Gates Studios in Battle, Sussex by the ‘Blue Meaning’ band line-up, the location where they also recorded The Blue Meaning album. The demo of Angels & Demons was recorded in late 1980 at Eel Pie Studios, Eel Pie Island. All four tracks on Side Two are previously unreleased on vinyl. The release carries stunning new artwork including previously unseen shots from the classic photography for “Four From Toyah” which saw Toyah in four different striking and meticulous looks representing all four songs. Strictly limited edition ‘jungle green’ coloured vinyl echoing Toyah’s make-up from the front sleeve shot. Brand new inner bag features rare and unseen imagery of Toyah. Official lyrics for the four songs (EP version) are also included. 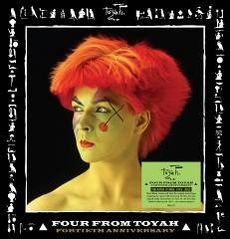