Follow us Follow us
Home  | rockin' with the krauts vol.2 real rock n roll made in germany - various artists

ROCKIN' WITH THE KRAUTS VOL.2 REAL ROCK N ROLL MADE IN GERMANY


The second installment in the 'Rockin' With The Krauts' mini‐series on Bear Family.

 32 tracks from 1956‐1967 ‐ German Rock 'n' Roll in its pure form, including twist rockers, Madison rockers, jivers, beat rockers and Rock & Roll instrumentals.  The second part is about such exotics as Wolfgang Sauer with his great version of For You My Love, Ted Hiller's version of Memphis, Tennessee, which really slams, and ... German dancing queen Marika Rökk, who delivers a rocker you would never have expected her to do!  Great cover versions and interpretations of U.S. originals such as Caldonia, Nag, Whole Lotta Shakin' Goin' On, Devil In Disguise and Runaway.  Besides rather unknown musicians like John Dattelbaum, Lutz Dietmar, Little Gerhard, Emanuel & Leon Ardy's Hit‐Cockers, Jack Finey & The Pralins, there are fine rockers from popular stars like Bill Ramsey, Rex Gildo, Billy Mo, Ralf Bendix, Werner Müller and even Marika Rökk, which you would never have expected from these performers!  Part 2 also highlights the swinging side of the ‘50s ‐ three titles with definite right to be included!  Many original singles are sought after, hard to find and often very expensive!  Six tracks officially on CD for the first time!  Notes by Roland Heinrich. Please, note: German language liner note 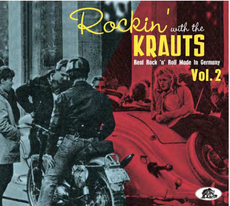