“I’ve always seen myself as a servant of creativity,” says Kojey Radical, “I’m only here to contribute".


"Outside of that it’s not about me.” The twenty eight year old multi-genre musician has emerged as one of Britain’s most thrilling and unique creative voices. Blending everything from Rap to Jazz, spoken-word to funk, Kojey manages to wrap narrations on the conditions of country, the celebrations of community and the relationship with self into soulful, rhythmic sounds that carry at stage shows and festivals. By doing so, he has become a voice for the unheard. With his debut album on the horizon, an exciting new chapter beckons.

Kojey was born Kwadwo Adu Genfi Amponsah to Ghanaian parents in East London, and remembers growing up in Hoxton during the 90s and new millennium in a time when the city was pulling together the stems of a brooding creative scene. Music was everywhere when he was young. Early memories from those nascent years include participating in a dance company ran by his older sister as well as seeing the family home filled with music by his older brother, a local DJ in the late Garage and early Grime scene.

By his secondary school and college years, Kojey began to dive into music on his warrant. At events thrown by local youth club Hoxton Hall he began to flirt with the idea of crafting art of his own. Things progressed when Kojey was in college. He remembers a guest visit from viral poet Suli Break, who came to read in an assembly one morning, and eventually inspired him to start writing poetry. So, as a student, he would write in the evenings and then bring his first citations to the lunch hall, gathering his friends around the tables to recite the often comedic pieces he had fashioned.

This fleeting passion turned to something more serious when he began attending a string of poetry events and talent shows rumbling across East London in his late teens. It was around 2010, and young working-class kids in London’s inner cities were seizing creative control into their own hands and spilling their early life experiences and perspectives into spoken word poetry and DIY YouTube films.

In his performances and short videos uploaded to YouTube Kojey bent towards music, singing as opposed to traditional spoken word, reciting his lines over acoustic guitars, the stems of his musicality taking shape for the genre fluid musician he would eventually become. Early poems like Chapter 2 were the embryonic versions of London’s now thriving creative scene.

“It was early Tumblr days,” he remembers, “Power had shifted towards creatives.”

In a studio session with childhood friend Jay Prince, Kojey made his first song The Garden Party and began to focus more seriously on incorporating music into his spoken word. A debut EP Dear Daisy followed in his 2014 while he was studying Fashion Illustration at the London College of Fashion. It was a stirring body of work that took apart his early childhood, combed in ruminations about religion, East London and young love. Circulating on Soundcloud, it was his first entry into the music industry.

Shortly after the release of The Garden Party, Kojey graduated from spoken word to full-fledged music.

“I had reached my comfort zone and finding ways to get inspired was difficult,” he says, “Then music comes along, and I can use all these other things, within this new medium and reach a new audience, and understand a new practice and from there I was just kind of hooked.”

First came Bambu in 2015, a bristling listen that takes apart the social conditions and fabrics that hover over some working-class communities in London. The accompanying visual became a cult piece of its time and was littered with an array of musicians, rappers and creatives who would go onto make significant contributions to a golden age of British music. Directed and made on a shoestring budget by creative duo The Rest, the video served as a visceral introduction to Kojey as an artist with a pertinent message about the collective social conscious and his determination to push the boundaries of what was considered possible for his artform.

The runaway success of Bambu led to a slot as a supporting act of Scottish band Young Fathers on their 2015 tour. And so Kojey, who had quit his job to pool his focus towards music, joined the group and played in Liverpool and in Norwich, in Sheffield and in Oxford, spilling out his music to new audiences from across the country.

In this same period Kojey had been hosting long conversations with his father about immigrating to Britain from Ghana post-independence in 1957. For hours they would sit together and hold nuanced exchanges about West African motherlands and new realities in Britain. When he came home, back to London, back to Hackney he began to fold this period of his life into a new body of work.

The result was the ten-track-long, critically acclaimed project 23 Winters in early 2016. It was a pensive meditation on the relationships we hold with ourselves, our communities and our heritages. The project was fragranced with words from his father and collaborations with Ray BLK, Tom Grennan and Bobby Lewis. A critical success, the project led to nominations at the 2018 MOBO Awards for Best Newcomer and Best Video.

A new project, In Gods Body, followed a year later and was another brooding expansion of his artistry. Following a dark period in his personal life, the project contained passages among his most introspective as he openly shed the troubles and traumas that had been plaguing his days.

“It was a darker time of my life where nothing around me was making sense,” he says “and the people closer to me were getting distant.”

There were feature from actor, director and writer Michaela Coel on Super Human, esteemed lyricist Ghetts on MOOD and British R&B icon Shola Ama on Icarus. Again, critically received, the project was supported by The Guardian, VICE and Dazed, and set a tone for an artist capable of folding his gift into projects with replay value.

After a string of three projects in four years, Kojey went through 2018 without releasing an extended body of work. Instead, a string of seminal singles and guest verses would follow. In the space of twelve months he unveiled songs that have now become cornerstones of his catalogue, including If Only, Water with Mahalia and 97 in a liberating burst of singles over a twelve month period.

Elsewhere he collaborated with acclaimed producer Shy FX on Bad After We alongside Ghetts, Coming Home with producer Swindle and Soak It Up with MJ Cole. For an artist who had for so long mean renowned for his Eps and mixtapes, this rally was unintentional he says. Having arrived in a space where “I had almost mentally quit,” Kojey had inadvertently ushered in a crucial evolution in his career.

A sold-out show at KOKO in November 2018 closed the year and he performed these new jewels of his catalogue to over a crowd of two thousand. It was among the first occasions he says, where the vision of himself as an artist begun to crystalise. In the crowd he remembers supports screaming and moshing and heaving to the songs, his music “moving people physically” for the first time.

The show was a defining moment both professionally and personally. “There was a shift in the kind of artist I wanted to be,” he says.

Following this building of momentum, Kojey entered into the most prolific stages of his career. 2019 brought a new project: Cashmere Tears, another critically acclaimed body of work that received high praise and a string of accolades. Cashmere Tears cast Kojey in new light, his poetic musings sitting alongside funk horns and trombones, celestial strings and wailing horns, the music a reflection of his scattered influences, all blended seamlessly into ten songs.

Songs like Can’t Go Back, the result of a 19-day recording studio trip in English countryside find Kojey at his most vulnerable and most melodic, pertinent passages of hope spread across the saintly instrumental.

“I wanted to find a way to speak to my audience in a way that’s best helped them,” he says.

Following Cashmere Tears, Kojey received an Ivor Novello nomination for Black Rose, a song he featured on with Ghetts while 20/20 from Cashmere Tears received a MOBO nomination for Best Video. If Only was featured in cult Netlfix series TOP BOY. Eleven featured in Michaela Coel’s critically-received series I May Destroy You and Water was included on the official soundtrack for FIFA 19. Elsewhere he sold out the 3000 capacity Roundhouse for a show that was scheduled for December 2020, a feat he will look to build on in the coming year with an ambitious set of touring plans in the pipeline.

His emergence onto the mainstage has laid the ground for a much-anticipated debut album. Kojey describes the project as multi-genre, a sum of live bands in studio sessions with a string of his favoured producers. The intention he says, is to bring “the energy of all my favourite periods of music, of Black music to tell this wider story.”

Over 100 songs are currently being whittled down to make the final album. It’s set to mark the start of a new and exciting chapter in the career of one of Britain’s most thrilling creative minds. 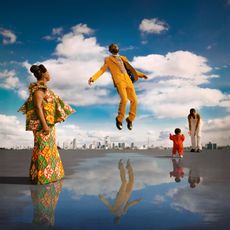