The Indie-folk band's concept album, ‘Alchemy’, is based on an old folk tale of The Alchemist who finds a message in a bottle from his younger self beneath Keston Ponds, in the group's hometown.

The Anthem of the Alchemist tells the story of an Alchemist who dedicates his life to turning basic metals into gold, only to discover when older that the treasures he sought were always within him. Using this fable, the Cobblers set out to create an anthology of songs that would help guide the Alchemist and any other lost listener to discover their inner wealth. Matthew says: “We wanted to return to the origin of Cobblers, delve into the folklore behind our ethos and create an eclectic album that is quintessentially ‘Cobblers’.” The album journeys from anthemic, raucous singles such as their first single "Find My Way", "Rigmarole" and "Jupiter", to the stripped, beautiful song writing of "Lullaby for the Wide Awake", "Eglantine" and "Junctions". The Cobblers also go back to what made them unique from the start, with idiosyncratic tracks such as "No, You Are Not Alone", "Josephine’s Routine" and "Strangers Now". “Rambunctious folk and joyous elemental pop” - The Guardian “Furiously contagious....uniquely, charmingly British” - Clash “One of the best new discoveries I’ve made” - Steve Lamacq 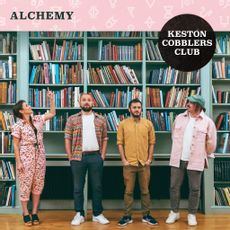