a 7" single of songs not found elsewhere and exclusive to this release.

Amy Boone and Willy Vlautin both love duets. Over the years Willy has written a few but so far they haven't fit on any of the Delines album. The wrong place at the wrong time sorta thing. The Golden State leans on the bands cowpunk roots dating back to Richmond Fontaine (Portland) and The Damnations(Austin). Willy brought it in to the band right just as they were drifting away from that sound. My Blood Bleeds The Darkest Blue was inspired by those great Nancy Sinatra & Lee Hazelwood duets. It has a real desert feel to it but at the time the Delines were working on The Sea Drift which was set on the Gulf Coast. So both are songs that the band loved but songs that were left orphaned and they thought they better give them a proper home before they got lost along the way. The Delines are: Amy Boone-vocals, Cory Gray-keyboards, trumpet, Sean Oldham-percussion, Freddy Trujillo-bass, Willy Vlautin-vocals, guitar, Tucker Jackson: pedal steel, Jenny Conlee-Drizos: accordion. 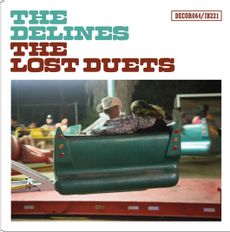