Ty and Emmett staged a spontaneous acoustic show at a Highland Park clothing boutique, in advance of the album release shows at LA’s mighty Teragram Ballroom.

With the packed crowd drawing magnetically toward the players, their performance elevates to the roof, intimate in nature but epic in response to the audience’s open enthusiasm. It seems awhile ago, but it wasn’t – not in days and months... whatever time is. But in terms of phases – we’ve been in and out of all kinds of bags since last summer, right? There’s the us before we heard the rest that 2022 had to offer, and then there’s us today. And coming on seven months later, fresh as it still is, “Hello, Hi” is disappearing in the rearview, like everything else that’s going down the road. But July 2022, it was in the headlights, dead ahead. We weren’t there yet, we couldn’t know what it would mean, but we were excited to find out. And in L.A., with the release show at Teragram coming up, Ty and the Freedom Band were working and playing to get it together. There’d be a little acoustic set to open things up, which was something different, so a last minute show was drummed up, for Ty and Emmett to work it out in front of some people. And that kind of became the REAL record release show. Word went out afternoon of the 21st - free show tonight in Highland Park - YEAH! A crowd showed up that evening and crammed in among the vintage clothes to hear some music and share some times. And most of us missed it! But nobody missed it quite like your present scribe did –- I went down, stopped in, said hi - my lady-friend bought a hat - and then we split, regretfully, a previous engagement to attend. What suckers we were! This show clearly ruled, just hearing the five songs included here. With the incredible feelings of the crowd and the spontaneous play in the songs we now know from the album almost miraculously captured to tape (by the capturer himself, Mike Kreibel) at FULL WARMTH, none of us can say we missed it at all anymore –- drop the needle and you’re there, at the launching of sounds that added to the evolution of the world we’ve been living in ever since! So that’s the story -- “Hello, Hi”, goodbye 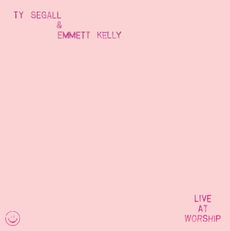